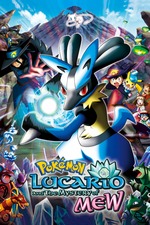 Pokémon: Lucario and the Mystery of Mew

Pokémon: Lucario and the Mystery of Mew 2005

Cried: 1:16 (Ash and Pikachu reunite), and a few minutes later when Ash DIES and it pans to his hat, forgotten.

Highlights:
- A different narrator---and it turns out it's the current voice of Dr. Eggman.
- Heavy "fantasy babble" (a term I first heard from Arin Hanson of Game Grumps)
- Ash and May send out their entire teams at a party full of people, because they are children with no idea how to act in mixed company
- Classic Pokemon movie flaunting of animation, but the flowing animation of the dancefloor makes me uneasy.
- Veronica Taylor's beautiful Ash voice soothes the soul. If only he had the personality of the first couple seasons.
- Jessie, on the centuries-old Lucario:"Perfect! I love antiques!"
- "I saw Mew transform into a PIDGET."
- The Regis are the most terrifying Pokemon in the franchise. Their warped noises freak me out.
- The Mew scenes can stay.
- Max tries to poison Lucario with chocolate, which he knows FULL WELL Pokemon can't digest.
- Another flawless performance by Meowth (Maddie Blaustein)
- In this movie I realize May is voiced by Veronica Taylor

Summary:
A rambling story of environmental crisis, a light "chosen one" plotline, tween heartthrob Lucario, and a very cute Mew. The gang find themselves at a festival celebrating a city's medieval past. After winning the festival Pokemon competition, Ash is awarded the role of Sir Aaron, a hero of yore. Suddenly, a Lucario belonging to the real Sir Aaron spews out of the antique staff he was given for the night. According to Lucario, Sir Aaron was an asshole who abandoned his Pokemon to flee the city at a time of war.

Meanwhile, Pikachu and the Pokemon gang are playing with a mysterious shapeshifting Pokemon---Mew! A woman at the festival, Kidd Summers, is on a secret mission to capture Mew, but her attempted are thwarted, and Mew escapes with Pikachu and Meowth. However, it turns out she just wanted to achieve another world record, which she collects. For the duration of the movie, I wait for her to turn, but she stays face throughout.

A lot happens in this film. Here is the quick rundown: The gang search for Pikachu. He is in the Tree of Life, which is actually not a tree but a land formation, but then actually it is a living being. The "tree" interprets humans inside of it as foreign bodies, and it sends "red blood cells" as antibodies to destroy them. The "Regi" trio attack the gang. All of the human characters die briefly. Their Pokemon cry. Mew brings them back to life, but becomes sick as a result. It turns out that Mew and the tree are symbiotic. The tree is in shock and is dying. The only way to fix it is to offer up one's entire aura, i.e. giving up one's life. Lucario tries to do this, fails, and then Ash does it in its stead because there is another plotline about Ash being Sir Aaron or at least very similar. Lucario lets Ash offer up his aura for a bit and then steals his thunder. All is well, and they unlock a flashback from Sir Aaron, revealing that he wasn't an asshole after all, and that he had offered up his aura to stop the war I guess. Then we watch Sir Aaron and Lucario die for real, and their energy is absorbed by the Tree of Life, and then the movie ends.

I have a distinct memory of writing a book report in fifth grade. It was long and rambling, but the teacher strictly wanted a summary and nothing else, so I kept writing, and oh god it just kept going but that's what she wanted.

Here's the thing. This whole generation of Pokemon anime felt and feels slimy to me. I don't have much evidence to back up my feeling other than this generation having come out in a key period of my human development. My body was changing. My hair became curly. I started wearing a bra. And goddamn did I hate Max. These earlier seasons are certainly seeped in gender roles, and it thoroughly pissed me off. And the Brock dynamic tipped me over the edge.

This movie turned out a lot better than I thought it would. In the end, Pokemon movies don't feature the main gang that much, so I didn't have to suffer through too much Max.

I can't write about this movie anymore. Goodbye