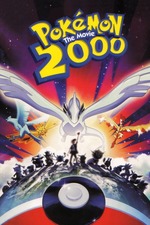 Cried: 35 minutes in (Pokemon rush to the islands to help)

Highlights:
- Amazon Prime listed this movie as "Rated G, with sexual content, violence, foul language." The only potential sexual content I could find was the tail-end of a joke told by Melody's sister: "And she says, 'No, but I have Krabbies!'"
- An overarching theme to this film is one of my childhood pet peeves: "Oh, you hang out with a GIRL? Is she your GIRLFRIEND?"
- I want whatever operating system Prof. Oak has.
- Team Rocket sacrifices themselves near the end of the movie. They expect to die (they do not). Ponder this.
- The second time in the Pokemon series, starting from season 1, that I've heard, "My lumbago!"
- Lugia knows what's up and fulfills any kid's dream for Ash: giving him a ride on is back for the fun of it.
- Hopefully the Pokemon returned by the time the ice melted???
- Ends with a song by Weird Al called "Polkamon," which I have somehow missed my entire life.

Summary:
Centuries-old tradition and civilization, not to mention the entire world, are endangered at the whim of a collector, whose obsession stems from a rare TCG card.

Importantly, the Japanese name for this film is Mirage Pokémon: Lugia's Explosive Birth.