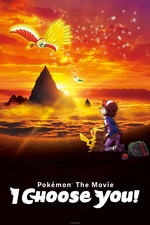 Highlights:
- Pikachu speaks, and it is very sweet, but admittedly I laughed in surprise
- Ash has a near-death experience (this is when I cried)
- "You're like your father!" - Delia Ketchum, indicative of a messy divorce (probably not)
- End credits song may make it into one of my playlists

Summary (SPOILERS):
The Pokemon Company tugs on the heartstrings with this retelling of the original series. Lots of classic plotlines make the cut, like "Butterfree's Goodbye" and "Charmander: The Stray Pokemon," with the latter feeding into a major plotpoint in the movie.

Ash Ketchum begins his Pokemon journal in the expected way; after waking up late, he receives the last-choice Pokemon at Professor Oak's lab: Pikachu, a stubborn electric mouse that hates Ash's guts. Long story short, Ash gains the trust of Pikachu and finds himself in possession of a Ho-oh feather, which apparently beams the way to a mountaintop where the Pokemon is said to roost.

Ash sets out, then, with two goals: check out this cool bird once more, and become the greatest Pokemon master to ever live. Along the way, he teams up with companions Verity, a girl whose personality is Girl, and Sorrel, who hopes to research legendary Pokemon.

The pacing of this Pokemon flick needs work. Lots of nostalgia fuel is crammed into 97 minutes, but the plot itself is scattered. There is a flicker of hope in Verity's character when she admits her relationship with her mom is strained, but it doesn't go anywhere. Also, Lucario, my least favorite Pokemon, is there.

It was fine. Just fine.

Pokémon the Movie: The Power of Us