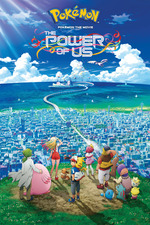 Pokémon the Movie: The Power of Us

Cried: Roughly one hour in, as Risa weighs having to run to the eternal flame

Highlights:
- Humanist anthem in the end credits ("I believe in the power of us ...")
- Environmentalism, a classic Pokemon stance
- Am I Toren or do I want to cradle his sweet, be-monocled face in my hands
- Gratuitous? inclusion of Ash Ketchum, an enthusiastic and unflawed child just passing through
- Give Risa her own show

Synopsis/teaser (SPOILERS AHOY):
Fula City is celebrating its annual Wind Festival to celebrate its ever-constant energy source. Three characters find themselves attending: Risa, at the behest of her injured brother; Callahan, who is treating his sister and niece to fun and, for his ill niece's sake, lies of his accolades; and Ash with his pal Pikachu, just because.

The scene is set. Ash and Callahan enter the festival's Pokemon-catching contest, and the former wins with the secret help of a socially anxious researcher, Toren. (Ash wins second place.) In exchange, Callahan, having a propensity for charisma and expert bluffing, agrees to speak at Toren's conference in place of the actual speaker, who dipped.

Meanwhile, the mayor's daughter, Margo, harbors a secret of her own: she is caring for a wounded Pokemon, Zoraora, who is feared by the city's inhabitants. Somehow, it has become law that folks may not venture into the nearby mountains because it is "cursed" by this rumored dead Pokemon. Margo finds that these longstanding beliefs are false, forging my favorite kind of friendship, one that involves a small human and a large, powerful beast.

In the meantime, Harriet, a former engineer, hates Pokemon.

These stories collide in a gorgeously animated 100-minute film. Classic Pokemon plot devices abound, like environmental disaster, Pokemon reluctant to trust humans, and legendary Pokemon saving the day. Nonetheless, I love Pokemon, and this movie was very sweet and good, allowing me to look past old tropes. It was FUN, and I CRIED, and the Pokemon were VERY CUTE.