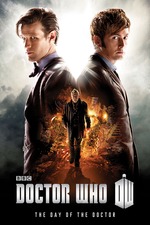 Doctor Who: The Day of the Doctor

The Day of the Doctor is a masterpiece, and my only opportunity to talk about NuWho on Letterboxd so hold tight.

Moffat pulled off the impossible in writing a satisfying end centred around the Moment, but I'll begrudgingly admit impossible is just what he does.

However, if you're not here to indulge in messy and personal fangirling: basically this special/film is genius, it's gorgeous, and filled head to toe with talented people on both sides of the camera.
Fan service done right.
In fact if you'll let me be boring for a second, I'll tell you it's a love letter to all 50 years.
10/10

I'm British, and like in a lot of British families, every adult has watched Doctor Who at some point in their life. And my parents specifically, had a fondness for sci-fi.
Doctor Who has been a part of my life since before my life began, and when I was nearly 5 years old it started airing again. For me and the people close to me, it was an instant hit. For very good reason.
When you're that young, time passes at a snail's pace. Days feel like weeks, weeks feel like months, months feel like years. And the whole time I was wonderfully obsessed.

Doctor Who is a programme that lives and dies by its writing, always has been. Badly written episodes can laughable, but oh boy, well written episodes can be unparalleled.
Doctor Who is a show that has shaped my entire existence. It impacted my parents' youth, and it has guided mine. This programme influenced my own moral code, my actual faith, and gave me passion in more things than I care to list.

Doctor Who doesn't just mean a ton to me, it's a central part of me.
And with that love, naturally comes attention. I've spent so much of my life thinking about Doctor Who, watching Doctor Who, reading Doctor Who, listening to Doctor Who. So it's safe to say I have strong opinions.
I'm very sincere about my feelings on anything Who. It has earned a level of devotion and honsesty I can't quite describe, although I have spent however many words trying just now.
Doctor Who isn't always good, it's not even mostly good, it's a rollercoaster. But sometimes it reaches highs unbelievable, and even when it doesn't, I'm there for that too.

Now I can properly say it.
When I love something with all my heart, and I tell you that this piece of it is brilliant... That should tell a story by itself.
It doesn't mean it's the best thing in the world, doesn't even mean it's up there with the best Doctor Who has to offer.
It simply. Means. Brilliant.