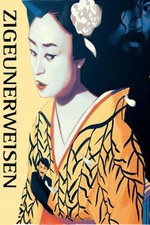 For somebody like me, who's developed an interest in cinematography and storytelling over the last two years, Zigeunerweisen is absolutely fascinating.

While I don't think all films need to be like Zigeunerweisen, a lot of them could certainly learn from it.
A large portion of scenes in this film are done with one or two shots. Reality bends to the whims of the camera, rather than the familiar alternative.
Zigeunerweisen grants you full view of its actors, the distance allowing body language and camera work to flourish.
It can be captivating.

However I find it hard to recommend this film to most people. Zigeunerweisen doesn't care to manage your attention span, either you're interested in what's happening or you aren't. Its story is unconventional to say the least. At times it's simultaneously slow and jarring. occasionally I found it hard to tell whether something really happened, or why it happened. But that itself just made me more interested.

It's ridiculous, and creative. It cares more about what it wants to do than doing what would be easy to watch.

Zigeunerweisen is beautifully strange and strangely beautiful. I'm excited to see how it makes me feel rewatching it a couple years from now.