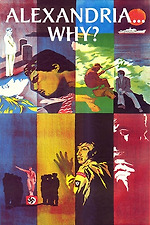 Yehia has big dreams of Hollywood, utterly preoccupied with the American Dream. His classmates are lighting their cigarettes while he's entranced by the glitz and glamour of cinema, before paying for another ticket to see the same movie again. He's obsessed with acting and filmmaking but confined by financial circumstances. Though I can't say I identified with any of the remaining characters nearly as much, I still think their storylines are all given, to varying degrees, enough consideration to be of interest. Some people are mislead and blinded by the status quo, with their only concern being to change it, oblivious to the danger that may entail. Case in point, we see people anticipating an imminent German invasion in hope it would liberate them from the British occupation. Others are pretty content with things as they are for they're technically surviving, and thriving, on sleaze. And then there are people who are simply passive, some of them are yet to be disillusioned.

Besides the main storyline revolving around Yehia, the script attempts to juggle multiple subplots but hits only a few barricades in the process. For one thing, it lacks a smooth flow due to muddled editing, resulting in some distracting shots. For another, it's unpolished when it comes to its tonality, as if the film regularly tries to attune itself to the characters focused-on at certain moments, coming across as out of place. Additionally, Chahine seems to adopt here more than one cinematic style, the thing that made the movie feel inconsistent. Then again, I think Chahine successfully managed, by and large, to squeeze all these characters, with their own plot threads, under the umbrella of WWII, which provides the backdrop of the story.

Alexandria… Why? is an ambitious and clever effort, which shows in every inch of its mosaic structure and artistic decisions. Cheerful music played over scenes interspersed with footage showing destruction to emphasize that war has become an essential part of their life, while underscoring the nefariousness of their world in a comedic light, and POV shots that involve us in Yehia's dreams. It's a film of cosmopolitan proportions; centring around British occupation yet flicking through other parts of the globe, all while being quintessentially Egyptian, even giving singularity to each household of different cultures and classes. Occasionally, it may feel a pretentious, jumbled mess or a pastiche of Italian cinema — with Fellini being the main inspiration, for sure — Mostly, though, it's a dramatic allegro of making the most of one's opportunities, executed at full throttle with a comedic vein running throughout, cemented by a genius ambiguous ending.