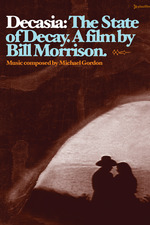 Decasia is about decay. Specifically it is about the degradation of early film stock and the extraordinary effect the process of decay can have on its images. The process has its echo in the natural world where a fallen tree might succumb to a combination of the weather, mosses, lichens and fungi, and to the invasion of insects and bacteria, slowly breaking it down, becoming barely recognisable until it no longer is.

In Bill Morrison’s film, the process of decay is frozen in time. He serves up a compilation of scenes from silent cinema originating from across the globe. These offer glimpses into our common past of people and events that are being digested by time. We see characters briefly emerge only to recede again into the physical decay and be lost. The effect is something like seeing a hand reaching from the sea before being dragged under. Because that is what the film feels like - images dying before our eyes. And what sad but exquisite deaths these are!

Morrison shapes his film to music. He has built a career around working with exciting composers across jazz and modern classical forms, and his films are testament to genuine collaborations, none more so than in Decasia. Here he teams with New York composer Michael Gordon from the Bang on a Can collective whose hour-long post-modern symphony provides the film its structure, rhythm and emotional wallop.

Gordon’s music is performed by a traditional orchestra augmented with keyboards, and electric bass and guitar. It starts with a gradual build up of overlapping and arrhythmic pulses, under dissonant drones and wailing glissandi, before developing a more motoric character, piling forwards with a reckless and relentless death car intensity. While its overall energy ebbs and flows, largely it is punishing, and at times even pulverising. But it combines this power with a keening quality as if parts of the orchestra are besides themselves with grief. The layers and opposing patterns of the music provide a sonic equivalent to the images - you hear them breaking apart as if undergoing their own decay. It’s a remarkable piece of music, made more so by Morrison’s curation of the stunning images and the emotional effect of their thematic union.

The music’s imprint on the images is to bring them to life at the exact moment of their death. While you could call this a requiem, it doesn’t serve to console. There’s a merciless quality to the music - a brutality - that sees the images struggle for life under its sonic onslaught as well as under the decay of their film medium itself. Considering this is all audio-visual abstraction I am surprised by how moving I find its cumulative effect. At its peak the tension becomes unbearable. I am keenly aware that all the hundreds of people ghosting across the screen are now dead. I often feel this with silent film, but I’ve never felt the sadness of the fact as much as I do with Decasia. This is like an exhumation, or a séance.

At times the characters turn to us and stare, as if accusing us of disturbing their decomposition. At others, they are the stuff of nightmares. Figures bend and morph into monsters under the force of decay. They appear to die before our eyes, swallowed by disaster. Sometimes the abstract patterns explode as if the people shown are the victims of a dreadful terrorist attack. It becomes difficult to know if the underlying footage comes from disasters and war, or whether it is simply the conflict of time being waged on the images themselves.

At just a shade over sixty minutes, Decasia reaches back over one hundred years and mourns the loss of early film and the procession of its lives glimpsed. The glory of Morrison’s film is the way in which he honours these images and highlights the physical effect of their neglect by amplifying the emotional content of both. It is like watching our own fractured memories, on the cusp of recall yet stubbornly elusive, calling out from a deep place within us that we are not ready to let go of. These images are drowning before our eyes, just as time will wear us down and wipe away every last trace of us.