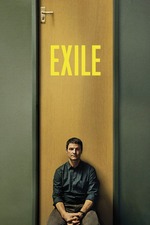 Exile is a nail-bitingly pensive and precise film. It follows Xhafer, a Kosovar man, living in Germany, married to a German woman with three young kids, and working for a German company as a scientist in a local lab. Despite appearances he is struggling to assimilate. He feels like he is being constantly judged as a foreigner. He thinks he is being deliberately undermined at work and that someone is racially harassing him by leaving dead rats in his letterbox. He feels besieged and this leads him to suspect his wife of having an affair with a young German man, just as he is bonking the Albanian cleaning lady at work, drawn together by their origins, despite their difference in social class.

There is definitely something going on but the film sticks close to Xhafer, so we see things as he does, and share in his disorientation. He is a proud man, and his response to threat is to bristle and confront, but whenever he tries to question or accuse his wife or his colleagues, they challenge his certainty with alternative perspectives that leaves him confused, and spiralling deeper into paranoia. The German summer is stifling, and he is in a constant sweat, left struggling to cope with the heat and psychologically starting to unravel.

What the film does well is to tread a fine line between Xhafer as the victim and as the aggressor. He is convinced he is being judged by his appearance, and yet he keeps misunderstanding what he sees. For most of the film it plays out effectively as a psychological thriller, but as it reveals the truth behind some of what has been going on, it starts to feel a little too contrived. But for the most part it is very well done and exerts a vice-like grip, helped along by a clever score of ticking percussion and chants.