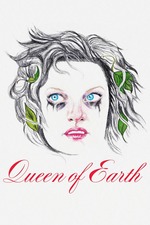 I really like how all of Alex Ross Perry's films,thematically speaking,are all different. But somehow his visual sensibilities are still there he does this cool thing were he sticks his camera right to the character so you can see the character but not necessarily what they're doing or who they're talking to. He does this a lot in Listen Up Phillip and I really like it.

Anyway this is the closest we've gotten to a vintage Polanski in a long time. I keep comparing this film to Tom at The Farm and I keep saying that this is how Tom at The Farm should've been Perry manages to keep tension up with visuals and an amazing score even though nothing really happens other than a complete mental breakdown but she's never dangerous. Both of the main actors are phenomenal they both have these really unsettling features about them and Perry really brings them out. Also for a Perry screenplay it's really bare bones his trademark dialogue only comes out in bursts, this isn't a bad thing it's a very good screenplay that has maybe one of my favorite lines of the year

The End of the Tour