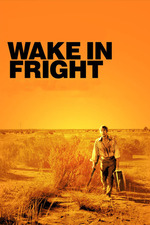 The horror of bored, restless men, left to boil in their own worst habits. Macho toxicity, visceral and sour, grim and sweaty. The heat and dust and flies and uncomfortableness of it all. How every time John tries to put himself back together, put on a clean shirt, it sweats through, falls unbuttoned, covered in dirt or blood.

Each man knows what's coming to him, he just goes and gets it.

The terrifying scale of the landscape that is hostile to the white men who don't understand it.

The neat and orderly nature of John's house – his mural of clocks and teapots; the upholding of British Colonial values and adherence to imperial time that breaks down by the end of the film, unable to remember what day it is, shedding his belongings.

All the little devils are proud of hell.

The self-enforced segregation from women and indigenous people creating an intensely aggressively white, male space. Mindless violence as a release for these men, seen in the hunting scene but also in how they grapple with each other, always rough-housing, brawling, rolling – hitting is the easiest way of getting touched. How they encroach upon space, sprawling bodies, the sheer volume they make (laughing, belching, braying).

There's something about the individual, overt and spectacularised violence of these men compared to the systemic, impersonal, normalised violence that civilization rests upon – slaughter, war and invasion by remove.

That's one way of getting out of town.

John's rage at Doc after their sexual encounter, for what he has done to him and what he has revealed about himself and his desires, turns to violence, first directed at Doc and then towards himself.

Perhaps by the end of the film, he's reached the same grim self-acceptance and resignation with who he is that Doc has with himself:

We break the rules, but we know more about ourselves than most people.

Dirk Bogarde and Joseph Losey snapped up the adaptation rights for this in the 1960s, before their project fell apart – I'd love to see what they'd have done with the thrumming threat of masculinity as an ugly mirror to self and its desires.