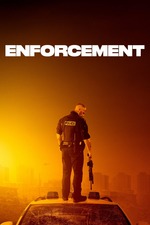 I guess there's an attempt there to play to every possible bias and to not let things devolve too much into gritty "thin blue line, someone's gotta do it, ride along and see for yourself" copaganda. At least it occasionally pays lip service to the idea that modern policing is riddled with systemic and personnel issues that are hard to truly reform (but softens the blow with some embarrassing bothsidesism).

Ultimately though, this is too much in love with its simplistic bare-knuckle action and clear divisions between good and evil to transcend its ugly tone-deafness. Women in niqabs and chadors are used as shorthand to signify "foreign" danger. The swelling music all but invites the audience to cheer when a cop shoots his way out of a tight spot with a machine gun. The only major public reaction to a police killing that the movie can fathom is faceless mobs of brown people throwing milkshakes, rocks, and molotov cocktails. Yikes.

One of These Days