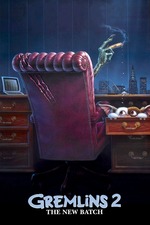 "What happened to HIM?"
"I dunno. I guess they pushed him too far."

Bonkers and balls to the wall, that's how I'd describe Joe Dante's Gremlins 2: The New Batch, this film is a great over the top comedic sequel discarding most of the original's ideas and just deciding to say fuck it.

An army of malevolent little monsters known as Gremlins take over a high-tech corporate skyscraper when a cute and intelligent exotic pet a Mogwai named Gizmo is exposed to water. The "Mogwai's" owner Billy (Zach Galligan) joins forces with the Trump-like head of the corporation to regain control.

Where this film shines is it's comedy, it's fourth wall breaks and them taking the piss out of the movie is gold, along with it's clever satire and the new batch of Gremlins are oozing with personality and makes them hilarious there are so many great gremlins in this one but my favourites are the intelligent one and the ones that are complete bonkers.

Whilst I still think I prefer the original one which I haven't seen in years, I'll watch that one during the Christmas period, this is a really great solid sequel, a few nit picks I have with it is it takes a while until you get the see the Gremlins and when you do Gizmo sadly doesn't get as much screen time although when he tries becoming Rambo in the end it's hilarious.

If you have seen Gremlins or thought the first one was too scary, I sure did as a kid I'd recommend checking this out, it is a superb sequel and is really hilarious and makes for a great solid fun movie to watch.