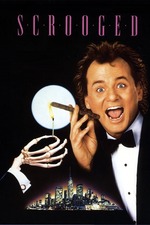 "I was a captain of industry; feared by men, adored by women."
"Adored! Come on, let's be honest, Lew. You *paid* for the women!"

Now I've got a question for you, what would you get if you put Peter Venkman from the Ghostbusters, Marion from Raiders of the Lost Ark, Charles Dickens's Classic, A Christmas Carol and the director of Lethal Weapon and The Goonies in a blender? If you said 1988's Scrooged, you are wrong because I didn't say magic blender, you'd get a lot of blood!

All joking aside I really wanted to watch this one seeing as Christmas is coming and Bill Murray is always great!

Frank Cross (Bill Murray) runs a US TV station which is planning a live adaptation of Dickens' Christmas Carol. Frank's childhood wasn't a particularly pleasant one, and so he doesn't really appreciate the Christmas spirit. With the help of the ghosts of Christmas past, present and future, Frank realises he must change.

Bill Murray like always steals the show as basically a Scrooge type of guy yet also being funny with his humor, while the opening is a bit boring once the ghosts appear they steal the show which kind of affects the rest of the film seeing as I was more interested in the scenes with the ghosts, also even though this is classed as a comedy I wasn't really laughing maybe they needed more comedy but I was pleased with this film in general.

This is probably my favourite adaptation of A Christmas Carol and if you're watching TV at Christmas and Scrooged is on I'd definitely check it out since it is a great solid feel good film for the holidays.