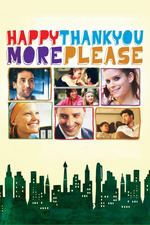 I liked this film for the most part. Malin Akerman's character has alopecia and is probably the hottest character in the film. Sam (Josh Radnor), our writer/director/leading man tries to help out a kid, Rasheen (Michael Algieri). Kata Mara also makes an appearance as a bartender from the South adjusting to The City.

However, Mary Catherine (Zoe Kazan) threatens to eat her male partner's face if he doesn't “feed" her (I guess feminism hadn't been invented yet).