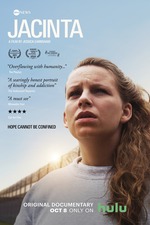 "I don't think my mom meant to hurt me. She didn't know any better."

Honestly, I'm still feeling so raw after this. This is an incredibly difficult, distressing story, and I can't recall the last time I was so shaken by a film. Earnshaw keeps rolling during some very dark moments, and while I understand the ethical questions around that, it seems that our subject was positively motivated by the camera, rather than sucked down by it. Jacinta says she wanted to be better because she was being watched, and she really did try her best. It's indescribable how Earnshaw manages to show Jacinta and her family at their absolute worst and yet still frame their stories with so much compassion. We understand her daughter's resentment, and we just as well understand how much that hurts her. Our subjects may judge one another, but the film never does. We only get the truth.

I like to think I've always had empathy for those who struggle with addiction, but this is the first time I've seen up close how physically difficult it is to get clean. The detox sequence looked miserable to experience, and when that's compounded by the crushing emotional need to feel good again, I can only imagine how truly difficult that is. So many of the choices made here and the wrong ones, but even doing the wrong thing is still difficult. The whirlwind of the final act proves that best, making it clear that getting your act together is far easier said than done. Change takes time, and so much continued work. No matter how much a person wants to be better for those around them, no matter how motivated they are, it's still so fucking hard. The cycle continues.