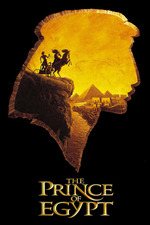 Few months ago I noticed people mentioning a classic named "Prince Of Egypt", and I was so confused how I never heard of it, I wouldn't just miss an animation classic that's about ancient egypt, thats literally the two things I care about most, and then I found that it is banned in egypt which made me more excited that it won't be the same story I used to, and now finally after 18 years of not knowing its existence, I got to see it, and what a masterpiece indeed, firstly, the animation is just too good that I cant wrap my head around it, and the story, even that the hebrew and Islamic version do have a lot of similarities and both arent the greatest tied peices, but the hebrew version is more sensible than the one that I grew hearing, the Islamic version is much more dramatic though, sometimes in a good way sometimes not.