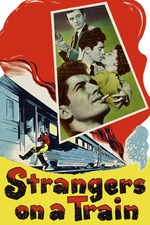 Strangers on a Train

There isn't actually a mystery in this story, you know who did what and who will do what at basically all times. And yet, somehow, there isn't a single moment without tension or that looming threat of another shoe dropping. Even a tennis match has stakes in this movie, this is so well laid out and structured. Then you get an awesome final setpiece that you wouldn't believe if someone told you. I also think this movie has some of Hitchcock's coolest shots, and even some good for the time visual effects.

Second only to Before Sunrise in how quickly you'll get invested in two strangers meeting in a train car.