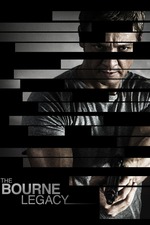 If there was ever a trilogy that never had enough interesting going on with its characters or plots to justify a spin-off, it's the Bourne franchise.

This has a good cast who are all very watchable. But everything else is terribly uninteresting, especially as the fourth entry in a series. It's more of what we've been given in previous movies, which is a problem considering this all felt thin and tired by the third movie.

Just give me one character worth a damn please. You've got all these great actors, give us one decent character. But this series has no characters at all and either does this entry. They're all just things - nonentities doing whatever the plot needs them to do.