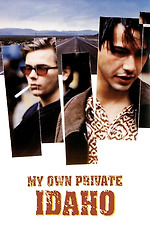 If it weren't clear from the look of My Own Private Idaho that this film is about "America" (with its wide shots of highways stretching out through the great plains of the midwest), then I hope that the score, which weaves in both "Home on the Range" and "America the Beautiful" does. Being about "America" isn't subtle in this film, or at least, I hope it's not. However, how Gus Vant Sant defines what constitutes his idea of "America" is beautifully subtle and strange. He looks in the crevices of this country and gives voice to the typically voiceless. He smashes together perhaps the most well-respected intellectual in America, William Shakespeare, with some of its most ignored citizens: homosexual men, the homeless, and prostitutes. Van Sant takes what is ignored or not followed through on and molds his vision of the U.S. out of it.

America and Americans tend to pride themselves (or at least pretend to) on this country being a melting pot, a place that accepts the poor, tired, and downtrodden. Whether you agree or not that this country does that (I would argue at the very least that it does it less than it purports to), Van Sant follows the melting pot idea to its extreme end: the complete erasure of cultural identity and personal history. Both our leads here, River Phoenix' Mike Waters and Keanu Reeves' Scott Favor are in what might be termed "parentless" situations. Waters has no parents whatsoever, and much of the plot centers around his attempt to find them and have some cathartic moment of finding out "who he is." Favor claims two fathers, but both are ill-fitting and couldn't be more different. He has his biological father who is rich and cold, and his spiritual father, Bob Pidgeon, who, as a gullible and possibly insane homeless man, has no opportunity to offer Scott any stability. I also believe that Mike's narcolepsy ties into this theme as well, a cultural/historical amnesia, manifested literally where he wakes up in strange places that he can't remember how he got there or what he should be doing.

Van Sant also beautifully delves into America's bipolar desire to be recognized as cultureless and cultured at the exact same time. The U.S. is a nation that claims as its heritage, baseball and apple pie, yet at the same time will fight the stereotypes that surround its tourist behavior: ignorant and rude. Here, we have Bob Pidgen, a loud abrasive bum, who speaks only like the characters of Shakespeare plays (an ironic turn if I ever saw one, as in his own time Shakespearean language would have been commonplace). He both reaches for a level of intelligence and class that he doesn't fully understand yet at the same time is oddly proud of his homelessness. Van Sant also visually blends what might, in a lesser work, be divided into "high" and "low" art. What early gripped me in this film is the shot of the house being dropped onto the road being used as a metaphor for ejaculation. It's an intentionally obfuscated image, one that represents what many in America would call low desire (the desire to cum) with the avant garde and unintelligible.

Finally, Van Sant brings his American characters, to the "Old World," the source of Western civilization, but he interestingly chooses to bring them to Italy as opposed to Great Britain. I think he's drawing a connection here to a once great nation, that had a say in almost all of the world's goings on, but is no longer anywhere near that standing. I don't believe Van Sant is saying this is where America will end up but rather that he sees more in common between the U.S. and Italy/the Roman Empire than he does between the U.S. and England. Or at the very least, he feels like that Italy makes for a more interesting point of comparison.

I had been wanting to watch this film a long time before I ended up watching it. I'm not sure why I hadn't gotten to it earlier as I've long been a Keanu apologist, and I've always assumed that this would be the piece de resistance of my argument. Sadly, I must confess that, personally, while I like Keanu here, I prefer his performances in the Bill & Ted films, Parenthood, and Speed to what he does here. But while I went into this film merely hoping for a great Keanu performance to underline my persistent enjoyment of his screen presence, I got something much better: a fantastic film and a perverse and beautiful look at the country I call home, in particular the parts of it that I feel get the short shrift in popular culture.