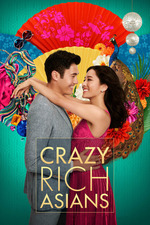 what felt like a long, incredibly luxurious (and overdue) exhale:
SEEING a casual conversation between friends over FOOD that isn't white!
HEARING MUSIC my parents listened to scoring a wedding! a party! the end credits of a whole-ass movie!
CHEERING for appearances (that cameo in the end credits !!!!!) made by celebrities that would NEVER otherwise have a big cameo in which a partially (maybe even majority) white audience GASPS.

these are the most natural things in every single movie ever but why is it so NOVEL.

asian identity that is GROUNDED in a SPECIFIC place that isn't American, that is also modern and glamorous and complicated and historical and is the exact opposite of every Asian story America is used to being portrayed.

Beneath the glitz and all the rom-com of it all, Crazy Rich Asians contains the incredibly nuanced truths of Asian AND Asian American identity.