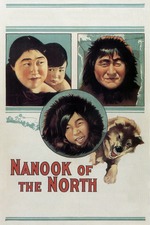 Yes, it's true that I didn't personally enjoy, or was particularly enthused about the premise of this film. Simply, it's a day in the life of Nanook, and Eskimo living in Canada. The film was made out of Robert Flaherty's experiences while he lived amongst them, but many of the scenes were recreated for the purpose of filming. But as I said, nothing particularly breathtaking about the film.

So, one may ask, why is this an essential film to see? Because of its influence. I remember seeing The Cabinet of Dr. Caligari, and thinking "hey, that was an okay film." Again, nothing special. In some parts even, I found the film to be quite slow. But the film is essential in the sense that it has provided so many modern directors with an influence; something to build on. Like The Cabinet of Dr. Caligari influenced Alfred Hitchcock, who in turn influenced someone like Denis Villeneuve, Nanook of the North proves to be the overarching outline for the documentary film.

Is the film perfect? Far from it. But, for a first, being made in 1922, it's pretty damn good. Flaherty keeps it interesting, yet not showy. It plays out as an honest portrayal of Nanook, even though it may not have been completely honest. It's a fascinating study of a human being - both in visual spectacle and human emotion. Nanook of the North is undeniably influential to modern documentaries.