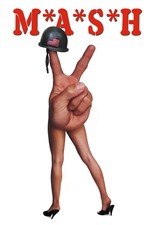 “I wonder how a degenerated person like that could have reached a position of responsibility in the Army Medical Corps!” “He was drafted.”

To show it is to sell it. That’s the thrust of the oft-quoted notion, attributed to François Truffaut, that it’s nearly impossible to make an anti-war film. The depiction cannot help but ennoble and romanticize, even if the intent is to do anything but. The solution? Don’t show the war at all.

Robert Altman’s M*A*S*H, which contains nary a battle scene, is as effectively unromantic a film as one could produce on the subject of war. The inhabitants of the 4077th Mobile Army Surgical Hospital are raucous and witty, but they’re so very angry. They seethe at their situation, and that fury informs every inch of the (frequently, if bitingly, hilarious) film. War isn’t just hell—war is an ugly, inhumane bureaucracy listing uneasily between tragedy and boredom.

Unease permeates the proceedings. Altman’s trademark roving camera and overlapping dialogue leave the audience as off-balance as the film’s war zone inhabitants. M*A*S*H’s episodic structure, drifting from incident to incident with only public address announcements to orient us, deepens the sense of instability—we’ve no obvious throughline or plot to which to attach ourselves.

Most strikingly, the audience is given no clear-cut protagonist for whom to root. Of course we detest the charmless Maj. Frank Burns (Robert Duvall) and his hypocritical piety. We sneer at the demented regimentation of Maj. Margaret “Hot Lips” O’Houlihan (Sally Kellerman), an Army brat so enmeshed in militarism her spine could double for a plumb line. (Her unhinged zeal at the film's late inter-unit football game hilariously demonstrates the fullness of her commitment to military endeavors and resultant lack of connection to the world outside them—no one was shot, you incredible nincompoop, it’s just the end of the quarter!) Their uptight humorlessness passes for easy villainy, and the teenager in all of us cheers their downfall with snide anti-authoritarianism.

Yet we can’t cheer wholeheartedly. Not when Capts. Duke Forrest (Tom Skerritt), “Trapper” John McIntyre (Elliott Gould), and Benjamin “Hawkeye” Pierce (Donald Sutherland) are casually cruel and unremittingly sexist. Hot Lips is surely misguided and unrealistic—twelve-hour days spent wading through gore and patching up human beings like an assembly-line worker require some cynicism and tomfoolery, if only to stave off the horror. But does she deserve to be humiliated over and over for her inflexibility? Does Burns deserve to be goaded into an outburst (and sent to a psychiatric hospital) simply because he’s a jackass? The imp within grins at their comeuppance, but the humanitarian cringes at its disproportion.

That, more than anything, seems to be the point of M*A*S*H. Not just that war is terrible, but that ugliness begets ugliness. Our nominal heroes don’t make Korea a better place by bringing humanity to the war; they use the war as an excuse to be inhumane. That they are charismatic and sardonic and wily while doing so makes them easy to watch, but not easy to stomach. Removed from the civilized world, the superego recedes and the id runs rampant to cringe-worthy results. Pain and pleasure become virtually indistinguishable (even something as desirable as an erection is referred to as being “angry”), and so one’s pleasure derives from the persistent infliction of pain on others as a diverting tonic, whether it’s Burns blaming Pvt. Boone (Bud Cort) for a patient’s death or Trapper’s retaliatory assault of Burns.

Altman, operating at the beginning of Hollywood’s Second Golden Age, foretells its road to success by letting the lunatics take over the asylum, but he also foretells its downfall, as letting the creative minds run amok eventually leads to behavior that no one can tolerate. That all of this happens against the background of the Korean War—a necessary palliative for studio executives concerned about being overtly critical of Vietnam—ends up being a masterstroke. Korea, the Forgotten War, a horror not large enough to be paid attention or infuriating enough to inspire angst. Toiling in a body-churning bureaucracy is bad enough, but when no one even notices it’s truly enough to drive one to distraction. The officers of the 4077th distract themselves by using others as verbal target practice while their bosses don't bother to look. The filmmakers of the 1970s distracted themselves by throwing out the cinematic rulebook while their studio overlords looked the other away.

But conscription risks bringing in uncontrollable characters, and eventually order must be restored. Yet for a brief, shining decade, the underlings ran roughshod over their commanders and produced timeless works of art. While we may not be able to cheer unreservedly for Hawkeye and Trapper’s savagery, we can salute the filmmakers of the 1970s and their output. Long live the rule-breakers—just so long as we don’t have to deal with them personally.