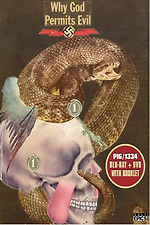 Pig is the last (and to my understanding, only…) film Rozz Williams made before committing suicide. It had yet to be edited and he was only midway through completing the score for the film when he decided to hang himself.

Rozz is perhaps better known as a painter and the leader of an early goth/metal band called Christian Death. His entire artistic career was defined by a consuming preoccupation with death, and in addition to writing/scoring/co-directing this; he also plays the serial killer.

If you’re squeamish about torture, definitely avoid this. For some reason, I forgot just how vivid the sadism in this thing really is. I first watched this film earlier this year on youtube and it initially turned me off. It was only the first of dozens of experimental short films that I would go on to watch throughout the year, so I just didn’t understand its purpose or aesthetics. The visuals did instill a deep, visceral reaction, but I mostly wrote it off as torture porn. I still think of it as a kind of precursor to the ritualized suffering found in torture movies like Hostel and Passion of the Christ from the early 2000s.

Crude as it is, these amateur filmmakers demonstrate a decent grasp of editing and cinematography. The film abruptly opens with a shot of the killer’s black briefcase, as he begins to pack it with a deck of cards, a children’s book titled “Mr. Pig and Sonny Too”, a bag of toy skeletons, and finally, sharp surgical instruments. A corpse lies on the killer’s floor. He casually kicks the body over to reveal the title of the film carved into its torso, and then departs in his car, scouring the desert for his next victim.

Filmed without dialogue, against a grating industrial noise soundtrack; most of Pig consists of painfully graphic images of a man being pierced, mutilated and carved into. With many shots, it’s clear that actor’s skin is really being pierced and put through a certain amount of pain with needles and razors. In one scene, the victim’s nipples are even tied to their genitals with a thick needle and some string. Yet, the torture doesn’t seem to faze the victim. Some of it seems to be influenced by the Manson killings (the word ‘pig’ is carved into the actor’s chest with a straight razor).

Perhaps Pig isn’t supposed to be scary, so much as it‘s meant to be a filmic representation of the inside of Rozz Williams’ head. The horror elements in this are very much of this world. There’s a morbid, cryptic pathology to Pig, and yet there’s also something strangely lyrical about the film’s dark iconography and surrealist aesthetic.