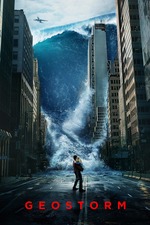 I took a shot everytime someone said "dutchboye" and wooooooo! GEOSTORM! I'M READY.

There's merit in meeting a movie on its own terms, even if it's dangerous. There's a lot of bad art and a lot of bad artists/people with money who have no creative ideas, so if you lower yourself to meet every movie at its level, you'll wind up excusing a lot of trash.

But who are we without our guilty pleasures.

Geostorm is the unofficial third entry in Roland Emmerich's already-unofficial global warming/end-of-the-world trilogy. Unlike The Day After Tomorrow and 2012, however, Geostorm has a sense of place. For starters, it sends Gerard Butler to space, and then there's a fact that it's called fucking Geostor! This is to Emmerich's movies what Pacific Rim was to Emmerich's Godzilla - a gloriously over-the-top, stupid version, basically.

Get drunk, watch Geostorm, have a good time, what more do you want from the movies.