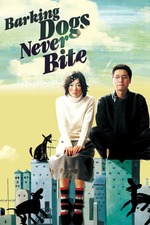 64/100
Yes! I've now seen all of Bong's films! I started with his latest and most acclaimed work Parasite and I finished with his first and least known work, Barking Dogs Never Bite.
I just finished the film, and for a feature debut, it's a VERY enjoyable film. You can almost see Bong take his baby steps into developing that lovable plot-driven dark commentary comedy style of his. It's all still a bit rough on the edges but I had much fun.
The core characters have their own personality and I thought that this diversity wouldn't mesh well by the end. But the story hit all the right beats and concludes satisfyingly. It plays with a very grounded and unique premise and it delivers. And the jazzy soundtrack was a standout, too.
I just thought that the film didn't really dig into deep territory. Unlike Bong's other films, Barking Dogs deals with just a few conflicts, mainly about the appreciation of animal life and of things of value to other people. And if you look closely, there's also very subtle class critique going on.
So overall, very fun film. I just personally find the lack of real depth to be the pervading issue but yeah, it's Bong Joon-ho. Of course I recommend. It's his first film so I give him a big pass.
If you want to see how my Bong Joon-ho rankings look like:
Bong Joon-ho, Ranked