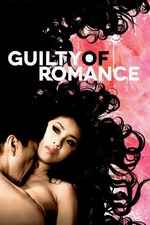 78/100
Finishing another trilogy was so unplanned but Sion Sono’s Hate trilogy is in the books after I saw its third and final installment, Guilty of Romance. While it’s my least favorite of the three right now, there’s so much to absorb and think about. Another challenging watch from Sono and his idiosyncratic, subversive, chaotic genius.

The film pulls you in immediately with a gruesome crime that has taken place in Tokyo’s red-light district where the victim’s body has been decapitated and dismembered, the lost limbs replaced by mannequin parts. As the police continue to investigate, the film interweaves flashbacks of a woman who lives an unexciting marital life with her famous and busy novelist husband. She works in a supermarket while her husband is out, and one day finds herself invited for a modeling job that quickly turns into a raunchy shoot. Soon, she meets another woman who mentors her, helping her to realize sexual liberation, and eventually works as a prostitute herself. Like anything Sono has done, Guilty of Romance is a film where nothing is as it seems.

Honestly, I don’t know how to piece this film together. Either it’s thematically-broad but too convoluted or I’m just dumb today. I have tons of ideas scattered in my brain regarding what Guilty of Romance is all about. It’s a routine of misogyny where housewives are basically housemaids for their partner whom they’ve bonded with in a marriage without romance. It’s a reminder that feminine beauty, that should speak to women, are also male fantasies consumed in different forms of media. It’s a searing critique of patriarchy and the lack of female agency. It’s a sad tale of women going to uncomfortable and often violating places to adhere to society’s standards of beauty, confidence, and sex appeal. Guilty of Romance is many things and the best comparison I can make right now is, this is Sono’s Eyes Wide Shut. I am sure to watch this again, and hopefully, I can arrange my thoughts in a more cohesive manner.

Story is once again captivating and intriguing with a strong sense of boiling tension and mystery. As with the rest of the Hate trilogy, the central characters in this movie come from an interesting background and slowly grow with the situations they are placed in. Full of morbid twists and turns, Guilty of Romance is unpredictable and entertaining; you’ll surely be questioning where all of this is headed. In addition to the great work on the story and characters, this is a film that is somewhat poetic in its dialogue, pitch-black in its comedy, and there are many memorable lines. That callback of sorts to Love Exposure’s ‘Corinthians 13’ scene is awesome, and the presence of love in action is also an important theme in Guilty of Romance.

Perversion and violence have been common subject matters in the Hate trilogy, so excessive sex, nudity, and gore is to be expected from this film. This is a very Sion Sono film and I love it. A hyper-stylized noir full of bright neon colors and paint splatter, Guilty of Romance is an intoxicating and well-shot film, but especially during the nighttime. The editing was really good and so was the music. The use of classical violin is both elegant and sophisticated but also plays for subdued tragedy and depression-- a perfect track for the suffering women of the film.
Aided by fantastic performances from Megumi Kagurazaka, who I just found out was Sono’s wife, Miki Mizuno, and Makoto Togashi, Guilty of Romance is engaging from start to finish because of the mainly female talent on show here. Finally, Sono’s craft and direction is once again top-notch. His films may be uneven but truly, he can do no wrong. He’s Sion Sono, baby.

Got nothing more to add and I’ll end this by saying Guilty of Romance, whilst not as good as the rest of the films in the trilogy in my opinion, is a cerebral experience of Japanese nightlife with an intimate look into the dignity in prostitution and the bane of misogyny-- a gloriously idiosyncratic finish to a wild trilogy that’s become one of my new favorites. Check this out along with Love Exposure and Cold Fish. Thank you for reading and stay safe!

And uh, ladies, if you ever have sex with a man who doesn’t love you, better make him pay!!!

Whisper of the Heart