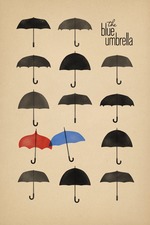 Just another day at Pixar, making inanimate things have feelings once again. The latest victims: umbrellas. And pretty much the entire city. Saschka Unseld's lovable short The Blue Umbrella is a good seven minutes of animation that even though I watched it just to kill time, it's too rude to discard it like that.

A basic metaphor for who seem to be star-crossed lovers, the trials of fate, and the triumph of human warmth and connection, The Blue Umbrella doesn't have the most wowing nor the most unique story but it's cute nonetheless. Though it'll go as easy as it came, I was delighted with what I saw in that short runtime. The photorealistic visuals and the charming animation, along with nice and calming music, set a perfect rainy day atmosphere ideal for modern-day, urban, heterosexual romance. I'm kidding... Wait, no, I'm not. I think the umbrellas have genders?

Really liking Pixar's animated shorts so far and thank God for them. I haven't seen a lot though they're my go-to when it comes to shorts. I can't say if The Blue Umbrella is up there with the best but it's worth checking out nonetheless.

The Legend of Drunken Master