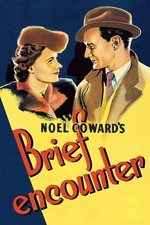 People made fun of Mike Pence a few years ago when he announced that he did not dine alone with members of the opposite sex (other than his wife). It was dubbed "the Mike Pence rule", although it's origins are more from the Modesto Manifesto established by Billy Graham and other prominent religious leaders of the day.

Brief Encounter could be Exhibit A on a defense of this logic. Typically, I suppose, most people do not set out to have an affair. It's a slow fade. An initial brief encounter. A second unexpected meeting that leads to a longer conversation, perhaps over lunch. Suddenly, the two individuals are naturally sharing intimate details to one another. Dopamine, serotonin, and all the other chemicals are released to the brain. Next thing you know, it may have gone further than either of you ever anticipated. This film is a master class in that scenario. And not too many films that are 75 years old can still feel this fresh today.

The real question is, "Why haven't I seen this film already?" My favorite film of all time is Wong Kar Wai's In the Mood for Love, a similar tale of two people falling with love without intent while society keeps them apart. These two would make for a great pairing.