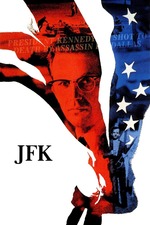 A sweeping portrait of lies, conspiracies and paranoia striking a bullet at the heart of America. JFK is essential viewing for anyone even remotely interested in the "mystery" of the eponymous President's assassination. Oliver Stone's epic (and the subsequent theory it presents) is presented in such a manner that one can't help but be drawn into his world. Perhaps the best scene to encapsulate this is the one where Colonel X talks to Jim Garrison about the bafflingly vast scope of the conspiracy and the agenda of the government. A scene so beautifully put together with fantastic editing, and being so mind-boggling and fascinating, that one will positively be at the edge of the seat regardless of what they feel about the circumstances regarding Kennedy's assassination.

Mixing facts with fiction, and blending real footage in the drama, JFK successfully manages to make us just as paranoid as we never thought we would be. With each successive assassination and attempted assassination, the fear increases; the suspects are beyond Jim Garrison's reach. Flashbacks start and stop, mixing with the present scenes with breathtaking editing. This 200 minutes film does not stop for one moment and barely feels half its runtime. More importantly, Oliver Stone pulls us into his world, declares it to be the real world, and somehow has me believing quite a bit of it. Ingenious craftsmanship.