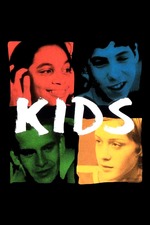 Describing what watching Kids was like would result in a series of paradoxes. It is tough to watch but you can't look away. It is disgusting and exploitative but it is utterly fantastic and raw. Kids is real.

Perhaps Harmony Korine's best script (take it with a grain of salt as I have yet to watch Julien Donkey-Boy), Kids chronicles the lives of some 90s NYC teenagers as they float through their days drinking, taking drugs and distributing AIDS like candies on a Halloween night. Korine and Larry Clark's vision is entirely soaked in nihilism; there is not even a hint of anything positive happening in their world. The characters come across as both authentic as well as deplorable. Yet somehow, by the time the end credits roll, there's an overwhelming sense of pity which is felt towards most of them. Korine writes about those members of society who are not represented in cinema well enough, partly because almost no other filmmaker dares to showcase them with as much authenticity, and partly because most viewers themselves either cannot go through films like these or empathize with the characters enough to warrant a viewing. Kids is not for everyone. The underage sex and detailed exploration of various hedonistic acts can put off many people. But those who are not fazed by this will witness one of the most essential films of the 90s.

There are many slice of life movies featuring teenagers in the vein of a Dazed and Confused or a Breakfast Club. But Kids is a rarity. Korine and Clark have none of the optimism of Linklater or Hughes. The cinéma-vérité style makes it all the more real, with the sort of social commentary that rivals the likes of City of God. If nothing else, they have made the best PSA put to video. An American masterpiece.