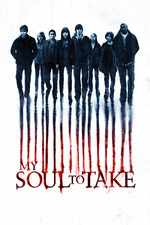 I had seen bits and pieces of this one before, but ultimately hadn’t decided to sit down and invest my time into it until now. I love Wes Craven’s work. God bless the man’s soul, no pun intended, but I often found myself asking quite often how he got here, given his track record for influential horror fare. It surely isn’t the worst thing I’ve ever seen, but it’s no doubt just not good. Yes, there are a few scenes here and there that sort of work and definite moments where Craven is able to show hints of an effective vision. Plus, the premise on paper is full of potential. Unfortunately, it’s really just hampered by consistently shitty writing, hollow characters and gore effects of which their computer-generated quality truly shines through in an undeniably bad way. Though, I will say one thing. The Riverton Ripper surprisingly makes for a pretty frightening motherfucker at times, which is never a bad thing.