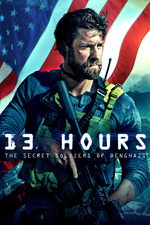 13 Hours: The Secret Soldiers of Benghazi

People who are already fans of Michael Bay's films will love this one, but I truly think even those who cannot stand him will like it as well. Easily his most mature film to date, 13 Hours is hard-hitting and absolutely gory, never taking shortcuts when it comes to showing audiences the violence that happened that day in Benghazi. The biggest surprise, however, is that the film is not politically charged at all. No jabs at Clinton, so I don't think it will be as divisive as many assumed it was gonna be.

Also, this is probably the closest we'll get to a Michael Bay horror movie (take that as you will). The film is *really* tense at times, and while some of the deaths feel rushed, the conclusion is heartfelt and also a tad bit heartbreaking as well. Bay takes this story seriously, and handles it with care, not pointing fingers as much as it's showing Americans being heroes - one of his favorite things. Also, the final shot of the film (before the archive footage and whatnot) is probably my favorite shot from any of his films.

Not quite his best (Pain & Gain is still my favorite), this is easily Bay's smallest film since Bad Boys and it makes me yearn for more of these small-scaled projects from him instead of the Transformers films he keeps doing. I hope he keeps doing films like this one, because it proves that he really is a strong filmmaker and not the mindless action director that he's known to be.