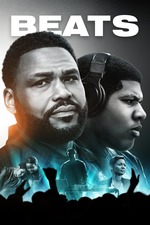 I knew absolutely nothing about this film, except for the fact that it was a potential commercial for Beats headphones. And three scenes in, we get a scene where our lead is clearly listening to Beats headphones. Honestly, that was the only time it happened and the film turned out way better than expected. My first critique is the fact that the score, while good, didn’t quite match up with the emotion of particular scenes. Our (first time) lead is believable as a character who suffered a tragedy. There is a tragic event at the beginning of this film and August has to learn how to overcome this; and get back out there. He has an incredible musical gift but refuses to embrace this. Because of this, Anthony Anderson comes in and tries to bring his talent to life. Now, just from what I have given, you can probably predict the beats (pun intended) that this movie will hit.

It could easily feel emotionally void, because of the similarities you can draw between it and hundreds of other films. But I saw a sense of passion from this first-time director, and a display of subtle   tragedy. It almost feels like a personal story he is telling, one that never dives as deep as we want; but still personal. That is the biggest critique I see is the fact that it is absolutely surface level. The characters are well-written and the chemistry is great; but the there was potential for so much more. I didn’t have enough connection to feel certain moments that the filmmakers wanted me to feel. The opening scene was tragically shocking and the end was well executed. I just can’t help but to think there was potential for so much more here. That being said, it still shocked me in a great way; and I am a sucker for Anthony Anderson, who is great in this Netflix original.