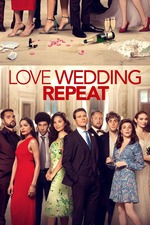 The Netflix model is continuing to prove consistent by providing us another mediocre Romantic-Comedy today. This one was extra-saddening because of the potential that it showed me in the first act. We were setting up these characters to be genuinely entertaining, and the idea of having this instance repeat over and over again is an interesting one. The further we went; the more I began to understand where we were headed. Once we finally hit the entire point of this film’s existence; was is too late to salvage it. Sam Claflin isn’t Hugh Grant, but he does his job well in this setting. The setting and the set design are actually two elements that I thought I would enjoy.

The idea of having this fancy setting and underlying elegant music, mixed with the brash humor and constant swearing, is a good one for a Comedy. The juxtaposition doesn’t work, the jokes don’t land as often as they are delivered, and this British dry humor doesn’t capture that witty and sarcastic tone that it needs to. There are a few gags that work, but most of the humor is dull. The film has a slow buildup, and far too many storylines to warrant proper enjoyment from one of them. It’s just an overall forgettable movie (with some occasional scenes that work well). The chemistry from our main couple was solid, but they don’t share enough screen-time. Netflix missed the mark here, but the concept alone will make some fans happy that they gave it a chance. It isn’t an embarrassing misfire, but it isn’t a film that nails what it’s going for.

We Summon the Darkness