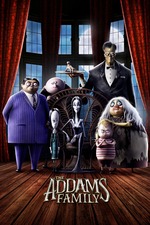 It’s unfortunate to watch this unravel on the big screen when I was genuinely excited after seeing this cast. The cast is by far the best part of the film and the part that succeeds the most. They all capture their characters so well, especially Oscar Isaac, who was born to play Gomez Addams. I just wish he had a better script to work with. I found this film to be extremely bland and one that could quite capture what we love about the family. It embraces the “dark” nature of what they stand for but feels far too quirky to appeal to adults. Yet, when it tries to be quirky, it never translates into humor. The worst aspect of the storyline is the addition of this Marqaux Needler character. She is an over-the-top television host and her goal is to have this town, that she renovated, in the palm of her had. It’s obvious where this story is going to go, and while the effort to insert a predictable message was nice, it’s another aspect that fell flat.

It’s like every single “special” thing they tried to do felt lackluster because of how poorly written/directed it was. It’s just ridiculously dull, almost dull enough to bore young kids. It will keep the young ones entertained enough but it occasionally even seems beneath them. Adults have to sit in the theater with their kids so animated films have to at least attempt to appeal to both. It’s clearly a movie for kids and that will be the argument. There wasn’t a lot of laughter coming from the kids in my theater. It’s a bland story, that hits every cliché beat, with bland animation. The Pugsley storyline is cute enough but his character never felt right to me. It was the same feeling I had throughout the entire film. They never captured the right tone for what The Addams Family should be. I would recommend watching The Hotel Transylvania movie because they, at least, capture that quirky tone.

The Death of Dick Long