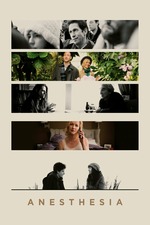 A stuffed-shirt, bleeding-heart college professor uses his dying words to make an obscure reference to Renaissance writer Michel de Montaigne planting his cabbages. An African-American crack addict is strapped to a bed in a hospital and he yells for someone to come and "extricate my ass." An alcoholic socialite with a cheating husband bemoans the hypocritical nature of her existence in New Jersey and being "irrepressibly ambitious" while chopping celery. Kristen Stewart self-mutilates with a curling iron because she can't stand how disconnected people in society are from each other. All this, and it's barely eighty-five minutes long.

I hate this film. I hate everything about it. I'm sure writer and person-who-yells-'action'-on-the-set, Tim Blake Nelson, believes he has crafted a socially-conscious, thought-provoking ode to twenty-first century humanity as seen from the Upper East Side, but in reality he's the one with the biggest disconnect, lacking the talent and irrepressible ambition to transcend his privileged perspective. Pretentious doesn't even begin to describe Anesthesia, a film that parades around in a self-congratulatory, condescending, manipulative, elitist funk. This will be, if there is any mercy in the film world, the worst thing I see in 2016.