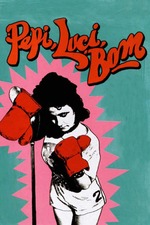 It never really occurred to me that Almodovar owed much of a debt to John Waters, but his influence is all over the playful offensiveness of Pepi, Luci, Bom - complete with the hammy acting that seems intended to keep you from ever believing in the reality of the world it's creating. I guess anybody who loves to shock as gleefully as Almodovar does would have to be a Waters fan, but he quickly learns how to do it in much more sophisticated ways over the course of his next few films. I had a great time watching his debut, though, and its sloppy cheapness actually works to its advantage.