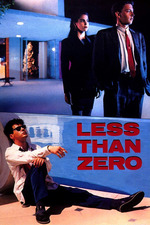 You could’ve easily told me afterwards that this was some unofficial sequel to Ferris Bueller’s Day Off and I would not have thought twice about the validity of your statement. That character was one bump of coke away from an after school special.

Also how has James Spader not played the literal Devil yet? That’s something that would seem right up his alley, especially here when he’s peak piece of shit. Slicked back hair, white bathing suit, sloppy steaks, white couch. You know…the works.