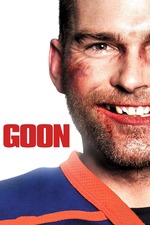 Harumph. The consistently good word on this led only to embittered disappointment for me, offering just a fecklessly violent and limply unfunny sports movie that might just as easily be titled Happy Gilmore on Ice. Liev Schreiber does a suitably menacing job as the professional hockey player whose ban from the game begins the film, while Sean William Scott struggles to cope with a character who flits periodically from imbecilic schlub to thundering thug. Scott’s dumbfounded schtick is presumably intended as loveable, yet for me it proved only intolerable courtesy of his aggravatingly artificial delivery and the general ineptitude of the script, co-written by Evan Goldberg, whose Superbad sensibility of maximum crudeness and flat efforts at human drama here once more fails to craft characters even remotely resembling people in the real world. It’s dull and dumb, and everything in it has already been done to death.