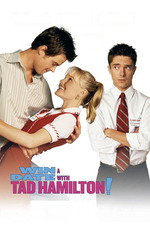 Win a Date with Tad Hamilton!

Reminded me a lot of The Truth About Cats and Dogs, in which the filmmakers treat the Uma Thurman character like dirt because she's beautiful, even though she has a dozen other lovely qualities, too. Here, we're to root for the hostile, petty, smarmy, cowardly Topher Grace character over the hollow but open- minded/hearted Tad just because Tad has the tactical advantage of movie stardom. Robert Luketic gets worse with every movie so this, his second, is nowhere near his nadir, but it's so ill-conceived you can't even veg out to it. Gary Cole is hilarious, though, as the kind of midwest father who starts reading VARIETY and wearing "Project Greenlight" T-shirts to impress his daughter's Hollywood boyfriend.