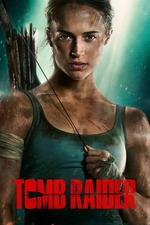 I've been a HUGE fan of Lara Croft and Tomb Raider since I was a child. Tomb Raider III was the first video game I played and since then Lara is part of my life. I've played (and replayed) all the major games and several others, including, obviously, the two most recent titles: the 2013 reboot and Rise of the Tomb Raider, in which the plot of this new movie is based.

The Croft manor was my second home and Lara Croft will always be my muse. Even the name of my goddaughter, Lara, was my suggestion in honor of the character and what she always represented for me: an example of courage, beauty and intelligence. Her mother accepted because she thought the name was beautiful, but she didn't want to put the "Croft", obviously.
I wish I could've watched this movie with her, but she's still only 6 years old.

I'm telling all this because it's impossible that my experience and passion for the games and Lara Croft doesn't influence my critique of this film, for better or worse.

First, I have to say that as an adventure movie, "Tomb Raider" is quite common and follows Hollywood's standard, but it's well produced, well acted and, above all, it's fun.

Alicia Vikander gave herself to the role. Body and soul. Mainly body in fact, which she used in practically all the action scenes (the stunt double had almost no work to do). She trained heavily for this movie and her muscles show that. Dedication like this is rare nowadays. Bravo!

As an adaptation, the film is okay. I liked that it spents a good deal of time developing Lara before arriving on the island. The game already starts inside the Endurance (which is a much larger ship there). The good thing is that all these new scenes added by the movie combine with her character. I can see Lara doing all that stuff.
It also serves to explain some of her abilities since the film has very little time to spend with her learning things in the island, unlike the game.

The large number of uninteresting characters drag the 2013 game's plot (they fix this a bit in the sequel though). Unfortunately, the film does the same mistake and fails to understand that Lara is the only star. The plot and everything else should be just a stage for her to shine.

The games' stories have almost always been basic with the focus being more on Lara's intimate experience with the challenges around her. So it was expected that the film, although fun, would never deliver the main factor of the games' success, which is precisely the connection that the player creates with Lara, unraveling secrets and overcoming traps alone with her for hours.

There is also the question of time. The game in which this movie was most based (Tomb Raider 2013) lasts about 8-12 hours. Of course, MANY cuts would have to be made and, looking in this aspect I was quite satisfied with the result that went to the screen.

The scale of the events has been diminished and with that also diminished the extreme violence that is a important part of Lara's development.

The big problem I had with the changes was in relation to the supernatural aspects, which are very strong and important in the game, and which have been discarded here for a realistic (and boring) approach.

But, like an out-of-order summary, the film manages to adapt the game's plot effectively. If they couldn't adapt all the fantastic sequences of the game, at least they chose one of the best (the river sequence) and did a good job on it.

I missed the puzzles with use of wind and the spectacular sequence of Lara's awakening on the island. At least they made some references later (such as the twig traversed in the belly and Lara's escape in the final part).

Unlike the recent games that practically abandoned the old puzzles for more realistic challenges that use basic knowledge of physics, the film prefers an old school approach in the third act with classic puzzles and traps. It was an interesting choice but also quite out of place in relation to the more realistic approach of the plot.

I really liked how they did the scene where Lara kills a human being for the first time. It was more emotional than in the game but without the controversial insinuation of rape.

By choosing to develop in two hours the maximum of the plot (including parts of the plot of "Rise of the Tomb Raider", the second game after reboot), important moments of exploration with Lara alone were sacrificed. These moments are fundamental in the game to show the evolution of Lara (she does her own bandages, she learns to make fire, she has to kill an animal to feed herself ...). Here, Lara gets a lot more help and this undermines the credibility of her (super fast) evolution.

In addition, in the new games, despite being present in flashbacks and in Lara's motivation, her father doesn't have a huge presence, precisely because the overemphasis on Lara's family in previous games has become tiresome for fans. Unfortunately the film goes against this and brings total focus back to Lara's father.

This element could've been totally discarded because it just divides the villain's attention and steals time that could be used for Lara to develop her abilities alone, without so much help and doing more what is expected from THE tomb raider.

"Tomb Raider" wastes too much time trying to adapt the huge storyline of recent games and forgets to let its star shine, wasting part of the potential of Alicia Vikander who has devoted so much in physical preparation to the role. The result, though satisfactory, pales in comparison to the games and ends up being only a weak version of a much better adventure.