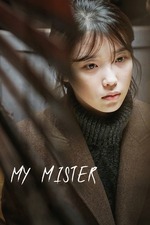 This is litterly the best kdarama ever. No other kdrama reached this point of rawness and depth. So beautifully executed from direction to screenplay to cast to acting to even soundtracks. My only tiny problem with it is the side characters. I felt like they got the same screen time as the main characters -which would have been a good thing usually but not with this show- when the story is all about the main characters.

It tells a story about a 20 year old woman and a 40 year old man, each feeling as if their life is collapsing while  facing their own problems and challenges, and the story of the heartwarming relationship that grows between them as they keep floating in each others orbits. With a very deep meaningful screenplay and a very comforting plot twist. IU’s acting here was superb and taking the role of lee ji an might be her best decision as an actress. (fun fact: iu also worked as her musician self for this show as she wrote the song “My Moon” for the show).

The character of Lee Ji An is the character that changed the way I view strong women in tv & cinema. I thought that ji an was sooo strong even in her weakest moments, because she still got up the next morning and went to battle with life all over again, every day. words can’t describe how comforting her character is to me. I’m glad this show is getting more recognition lately but it remains underrated to be honest.