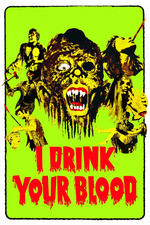 I Drink Your Blood is one of my favourites from the 1970s, and is one of those films that does what it says on the tin, whilst subjecting 1970s post Charles Manson America to its own fetid paranoia of the satanic drug-riddled hippy cult.

"Let it be known, sons and daughters, that Satan was an acid head. Drink from his cup; pledge yourselves. And together, we'll all freak out."

After raping and attacking a young girl, who was privy to their satanic woodland ritual, and who later flees, our traveling ensemble of hippy cultists decide to stop off in a small town, which is also home to said girl.

As they continue to wreak havoc within the close-knit community, their shenanigans begin to cause conflict with the locals. After some confrontational maiming, a young boy decides to take action (and revenge) by spiking certain pie products with rabies, and as the hippies dig in they ultimately start to become infected.

Cue complete chaos, as the infected stalk and attack anybody who crosses their path. Infection is also spread to a group of locals, who accept the invitation of an easy lay with one of the infected hippy group, and pay dearly for a bit of free 'n' easy hippy love. From the inception of infection until the final showdown, I Drink Your Blood is non-stop, fast paced slaughter romp, which should play to the tastes of many a exploitation fan.

For such a simple premise, the film is brilliantly assembled with murder and mayhem aplenty, with some superbly wacky performances; the most note-worthy of which are from Bhaskar, who plays the cult leader Horace Bones, and the manic George Patterson as Rollo. Add to this face paced thrills and kills and you have all the makings of a classic, and not the brainless gore-fest and product of the '70s 'Grindhouse' conveyor that it appears to be on the surface. A darkly tinged tale of consequence and despair lurk underneath its blood-drenched, axe wielding exterior. A good case in point is the very bleak (and in my opinion preferred) alternative ending, which certainly punctuates the preceding events nicely.

So, a completely biased review? Yes indeed. Most may/will find this trash, but what terrific trash it is!