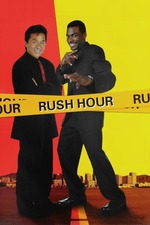 Jackie Chan's natural charms and energetic presence somewhat get overshadowed by Chris Tucker's overly hyper active mannerism, to mixed results. But the two of them make the ride that is Rush hour worthwhile. Their dynamic is witty, their characters are fun and their dialogue is sparkling and at times really hilarious. It's an action film as 90's as they come, which means that the plot is nonsensical and pretty much irrelevant to the film as a whole. It's a film best enjoyed with the brain turned off so to say. The comedic parts still succeed for most of the time, although some of the jokes seem a bit outdated and sometimes tend to be used a bit excessively. When the action hits, it does its job well, being thrilling, spectacular and fun and the climactic scenes really had me at the edge of my seat, just like multiple other scenes along the way. A film worth checking out, and actually really close to four stars, yet it doesn't entirely get there unfortunately.