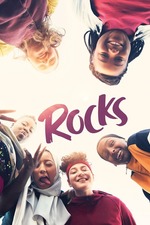 Rocks is a beautifully authentic and joyful celebration of young girls.

Rocks (Bukky Bakray) is a black girl in London with as a make up artist who lives with her mum and younger brother Emmanuel, but when she learns her mother has abandoned them Rocks takes on the responsibilities to sustain her and her brother despite trying to prove to those around her that everything is normal. As needs pile up, Rocks begins to alienate her friends even her close group of girls and best friend Sumaya (Kosar Ali)

To me that title "Rocks" doesn't just refer to central character's name, but I think it also represents the ensemble as rocks, they are each other's rocks and Rocks is herself a rock to her younger brother, who is dependent on her as his acting mother.

Sarah Gavron takes us on a hard hitting journey similar to the likes of Ken Loach, but still maintains an infectious glee when we see this band of young girls at their most spirited.

It is hard to really think of a film that has portrayed such a genuine naturalism of British youths and the lovable banter that is shared between them in the class room.