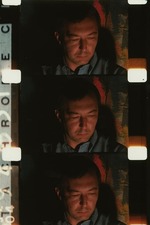 “For me, locations and beautiful people have always been the backbone of my work.” - Gregory Markopoulos

Portrait-oriented films I feel have an inherent “simple” quality - both in general construction (at least the PERCEIVED make-up) as well as in how the works are taken from the audience. The generic form of portrait film involves filming a subject (persons/people) for a given reason(s) or context by the involved artists; this form, at least in my experience, allows quite a bit of room for speculation since it is typically rigorous - hanging ones attention on to moving head shots of people for more than 30 seconds per subject would surely cause many to become irritable and cause ones mind to wander. This sometimes feels done by design rather than appearing as a byproduct. When watching films like these, my brain tends to immediately default to background and sequencing speculation. Take Gidal’s Heads for instance, a film composed of (I believe) handheld shots of friends/associates of Gidal. Having people like Thelonius Monk and Pete Townshend amongst others like Markopoulos and Schneeman is entertaining enough to think about on its own in a kind of silly “look at this” kind of way. I suppose

I’m already enough of a shill for Markopoulos as is so I’ll try to avoid hyperbole but I do think something like Galaxie isn’t far from the ideal form of portrait film on my end. Generically, it is much like similar films. Markopoulos filmed a number of portraits of his artist friends, from filmmakers to poets to the author of where the wild things are, mostly either in their living spaces or a studio of sorts. The film opens with a synopsis of itself, the clang of a Hindu bell plays throughout an opening montage of all the subjects; this is the whole of the film including the soundtrack. Opening with Parker Tyler’s scene is him in his studio, immediately following we’ve Markopoulos’ famous in-camera editing and superimpositions, perhaps the most immediate differentiator from associated portrait film, used to similar effects in his Ming Green. The scene progresses until the hammer is struck, a quick montage occurs and we move to Storm De Hirsch.

Galaxie’s form quickly evolves into one of constant and immediately growing complexity; in part due to the organization of the film being dependent on the order in which it was shot - meaning to say Tyler’s comes first because it was the first portrait Markopoulos shot, and so on. So here you have a pure growth in compositional complexity but what also follows is an additional clang of the bell per portrait. The length of the clanging per scene seems to correspond to the beginning of the scenes respective rapid montage.

These montages aren’t far from what one would expect from other Markopoulos films when looking at the editing but through the simple fact of this being Markopoulos documenting friends and associates (meaning to say based in reality). There’s an inherent grace to this form regardless of the framing (again, compare the form of this to Heads) but of course with Markopoulos this comes full blast even if he wasn’t trying.

A particularly fascinating aspect of the superimpositions is the incorporation of gestures and personal objects incorporated into peoples portraits (which also comes with the natural progression of the film like the clanging). Battcock’s scene, for example, is often spliced between two instances, one of a basic headshot, the other of him nude (I believe?) and laying on an exotic rug. I could most easily relegate this as a means of characterization but words of greater worth escape me at the moment. The biggest point of relation here’s easily Warhol’s screen test series and I think it’s a worthwhile comparison to make as while similar meanings can be drawn (documentation of beauty or something of the like or something something temporality etc) but figure and gesture are typically not big concerns of Warhol’s, with gesture being a key part of acting in Markopoulos’ catalogue.

Galaxie’s almost somber tone, as carried through the oftentimes either melancholy or apathetic demeanors of the subjects is incredibly evocative of painted portraits (not to say the images themselves are painting-like) adds such a simple but effective sense of Greg commemorating these people with their own eternal-isms that go beyond basic portraiture with incorporations of these people’s lives through montage and added objects, similar to the treatment of traditionally masculine and feminine objects or clothes in Himself as Herself; somber-ness being further rung in with the lack of sound other than the projector and the clanging bell. The film is, generically, an incredible demonstration of Markopoulos’ early portraiture techniques and one of his first major developments in form.