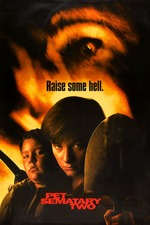 As I melted so slowly into my couch, feeling the wonderful pandemic-sized winter depression take its hold, I found myself wandering through endless streaming apps for a nugget of nostalgic horror... eventually I landed here... Pet Semetary 2: The Final Frontier

Eddie Furlong is traumatized by witnessing his mother get electrocuted to death on a film set, leaving him and his loner veterinarian pops, Anthony Edwards, to try and move on in a new town. Furlong meets the school bully, makes 1 friend, and then eventually they're burying dead animals together in the nearby Pet Sematary. Dead asshole step-dads soon follow. They all come back. Life sucks.

The first film was a pretty special blend of doom and fortified 80's horror genre fare, and with this being a 90's sequel and all things jacked up to oblivion, we get something more mean-spirited and dreary but too ridiculous to really do the heavier content justice. Clancy Brown is all in as the creepy step-dad cop Gus, but he elicited way too many laughs for a guy that beats the shit out of his step-son and then as a zombie rapes his wife.

This really is quite a weird piece of dour cheese. With an absolutely horrendous score but wonderful autumnal setting, and then Clancy Brown and Edward Furlong bringing some fun performances while Anthony Edwards just brings nothing, the tone is blown and it melts into a mess.
Hatred though? Hell fucking no. I had a blast watching this and howled at just about everything. There's splashes of gore, gnarly dream sequences, and occasionally the mean-spirited stars align for some very memorable and disturbing moments.

Flawed and inferior sequel, but for a cup of that 90's horror nostalgia I'll gladly refill in the near future.