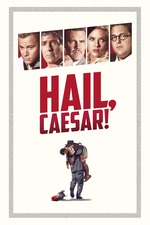 I've been hearing so many mixed things about this film since it came out last February, so I really had no idea what to expect. Being a big fan of the Coens, I had hope that the criticisms were misplaced.

On the whole, I liked this quite a bit, although I'm somewhat hesitant to commit fully to any strong feelings. The Coens have such a funny way of making films that mutate enormously upon repeat viewings (both The Big Lebowski and A Serious Man started off as merely "solid," but eventually became two of my favorite films of all time).

Sticking to basics, it can't be stressed enough how good the Coens are as comedic directors. The performances they get out of their cast (all the way down to the perfectly-cast bit players) are outstanding, their editing instincts are hilarious and their dialogue is beautifully structured — teasing out super specific character quirks and speech patterns, humorous observations about the plot at hand, as well as hinting at more significant themes lying on the periphery. It's probably tied with Hunt for the Wilderpeople as the 2016 movie that got the most laughs out of me.

To be precise, the first 45 minutes or so of Hail, Caesar! had me wondering what all the negativity was about. The recreation and gentle skewering of classic Hollywood is lovingly done and very accurate. I loved the parody sequences as well as all the behind the scenes stuff with Eddie Mannix (Josh Brolin's Hollywood fixer character).

After awhile, though, it began to wear on me a bit, as the goofy subplot antics and homages started to feel strung out. It's clear that there's something profound lurking in the corners of the film, but it gets a bit obscured and watered down by the sillier bits. But then again, maybe that's the point. Either way, it ends on a really high note, opening the door ever wider to fascinating thematic interpretations. As jumbled as it may seem in the middle, the film is certainly more thought-provoking than most comedies that get released these days.

I'd say Hail, Caesar! fits right in with the rest of the Coens' filmography. It would be especially interesting to see it paired in a double feature with either Barton Fink or A Serious Man, as there's a lot of murky material in here about faith and artifice that I'd like to explore further. These might not be as concisely laid out as they are in other Coen Bros films, but it's going to take a couple more viewings to say for sure.