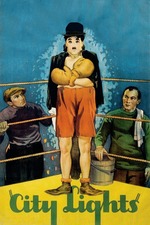 So...I hate this feeling. When you finally catch up with an undisputed classic that you should have seen years ago, one that everyone loves (dat Letterboxd rating spread!) and... you feel like you've seen a different movie from everyone else. I could take the easy way out and say it's a matter of taste and not rock the boat at all, but I'll point out brief problems I had and see if anyone is up to explain why I'm mistaken.

So...it wasn't as funny as other Chaplin films? Specifically, Modern Times and Gold Rush (both of which I loved). There were some great gags of course, but there were stretches where I wasn't that amused. Some gags were milked for much more than they were worth, like when he swallowed a whistle, and it made a sound when he burped. Yeah that's sort of funny, but it kept going. Likewise with the boxing match, which really wasn't amusing to me - only a couple days I'd seen a much funnier boxing match facade by Jerry Lewis in Sailor Beware.

I dunno, plot didn't do much for me either. Even if you do suspend enough disbelief to buy the rich man only remembering the Tramp when drunk, it's kind of silly? And the Tramp gives the blind girl money and 2 weeks later she can see perfectly and has a store set up and everything. I dunno, the relationship also didn't have that much going throughout, but I guess was sort of sweet at the end.

It was good, don't get me wrong. I just didn't quite see how it was that great?